PhotoSynth is a photo sharing web application provided by Microsoft that lets you upload your own photos of a place or event.  It then finds objects (like walls, floors, etc…) that match between your photos, then places your photos in a 3D virtual environment so that users can view your photos in a 3D space similar to the place where you took the photos.

Users can view your virtual 3D space either on the web at Microsoft’s PhotoSynth.com web site, or via a desktop application that they can download from Microsoft’s site.  The web site requires that the user has SilverLight installed.  If it’s not installed, they can install it in under a minute from the site.  Both interfaces (web and desktop) provide a nearly identical user experience.

If you want to make your own synth, here are some tips:

Patience, diligence, and plenty of free time.  I took over 1600 photos in a 5-6 hour period.  Filled up my 2GB memory card TWICE, plus about 1/4 again.  Stopped after each fill up and copied to my Dad’s computer (in the house pictured in the synth) in Chattanooga and uploaded to my home computer in Knoxville, except the last batch, which I just brought home with me on the card. 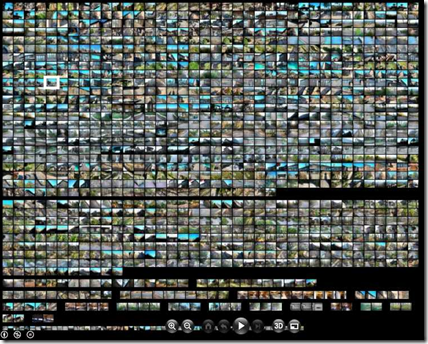