I bought this camcorder about 5 years ago (around 2004, maybe 2003) as a replacement for my older JVC Mini DV digital camcorder that eventually died.  I’ll be covering the following topics:

A special note about measuring video resolution:  In digital video, we don’t talk about “lines” of video.  Video is a collection of bitmap images (think snapshots with a digital camera) which are a 2 dimensional grid of pixels (colored dots), though, you’ll still find lots of specs and talk about even the latest and greatest digital video technology that still refers to “lines of video”.  This is an ancient carry over from analog recording and/or display devices where that measure had meaning.  In digital imaging (snapshot cameras, flatbed scanners, or video cameras), it’s only half of what’s important.  “Lines” is simply nothing more than the measure of pixels in the vertical direction.  With digital, you must also know the measure of pixels in the horizontal direction.  It’s entirely possible to have two cameras with the same vertical resolution, but different horizontal resolution.  Higher resolution is almost always better.

Refer to the following chart for standard resolutions with digital video cameras and display devices (TVs and Monitors) and technologies:

Graininess:  To the trained eye, the recorded video of this camcorder is a little bit grainy.  Most people won’t notice this.  But, this is a side effect of camcorders that also provide infrared recording (recording in complete darkness).  This camcorder DOES have infrared recording, which I’ll cover below.  This IR capability does affect normal light recording by inadvertently introducing a small amount of graininess.  But, the video quality, even with the minimal graininess introduced, is far superior to any consumer level analog camcorder.

Aspect ratio:  Aspect ratio is how wide an image is compared to its height.  For example, HDTV is much wider than it is tall.  For every 16 units of measure in the horizontal direction, HDTV has 9 units of the same measure vertically (called 16:9).  Standard definition is also wider than it is tall, but not nearly as much.  It’s much closer to a square.  For every 4 units of measure in the horizontal for SD, it measures 3 units vertically.  This camcorder can record in either 16:9 or 4:3.  You make the decision with a menu option before you start recording.  It should be noted that whether you’re recording in 16:9 or 4:3 aspect ratio, your video is always 720 pixels wide by 480 pixels tall.  When you play your video back on old style 4:3 display devices (non HDTVs), your widescreen video will look like it’s squished in from the sides, making everything taller and skinnier.  This is called “anamorphic”.  When you play your widescreen recordings on a wide screen TV (any HDTV), you’ll have to tell the TV to stretch the video to make it fill the whole width of the TV.  When you do that, your video will look like it’s supposed to.  In this day and age, I highly recommend recording ALL video in widescreen format since 4:3 TVs aren’t made anymore and they’ll be fewer and fewer of them.  Besides, you’re recording video to watch in the future, not the past.  I’ve been recording in widescreen mode since 6/27/1997 when I got my first digital camcorder.  I’m glad I did because all my home videos of my wife’s pregnancy of our first born and our daughter’s earliest years are compatible with our current HDTVs and they still look as good today as the day we took them (thanks to it being digital).

Low light:  This camcorder has 2 GREAT features for low light settings. One is infrared, which I’ll get to in a moment.  But there’s a visible light option that works fantastically in low light.  It’s called Nightshot Plus.  When you turn this feature on, the camcorder determines bright the area is that it’s recording and adjusts according to that light.  I recommend leaving this feature on all the time because in bright light, it has no effect.  As the scene gets darker, Nightshot plus will start shooting fewer frames per second.  Instead, it will collect the light from multiple frames, over time, and add up the light in them to produce a very good and light single frame.  The darker it is, the fewer frames per second you’ll have, but you can actually SEE what’s going on.  In very dark settings, the video is “choppy”, kind of like those old stop-motion animation Christmas specials.

The other low light feature is, of course, infrared.  This feature is called Super Nightshot Plus.  This camcorder can see infrared light… the light spectrum just below human visibility.  So, in a dark room, you can turn on the IR light on the camera (it can’t be seen by the human eye) and you’ve got military style night-vision.  When you look through the camera, you see a spotlight shining on everything.  Pull away from the camera and your own eyes, looking directly at the scene, see absolutely nothing.  It’s amazing!

Even better, you can have both low light features on simultaneously for unbelievable visibility in low or NO light conditions!

A large batch of CCDs (the component inside any digital camera, whether it’s a snapshot camera or a camcorder) made by Sony had a MAJOR flow in that they failed, miserably, after a year or two.  Many of the Sony DCR-HC30 did, in fact, have this flawed CCD batch, including MANY cameras from many other manufactures because they all use Sony CCDs.  My camcorder had this flaw that crept up around 2006 and got progressively worse, until one day, it didn’t work AT ALL in 2007.  My camcorder was out of warranty and I really wanted an HD camcorder, so I got a new one and left my Sony on the shelf until just recently when I found that there was a class action lawsuit and Sony agreed to repair all devices with this defective CCD.  I just happened to stumble upon this info on 11/29/2009, and guess when the deadline was?  That’s right, the VERY SAME DAY!  I called and e-mailed to get my request in.  As it turns out, that deadline was for Asia customers.  The American deadline came and went back in March 2009.  Customer service said they’d fix it for a flat repair fee of $186 plus change.  Considering I could buy a used (and working) DCR-HC30 on ebay for much less than that, I told them it wasn’t worth it.  Later, I got a call from the Asian customer service (from a separate e-mail request I sent), who offered to repair it at 1/2 the cost of $91 + change.  I agreed and figured this would be a decent cost for a backup camcorder or a Christmas gift for my daughter (yep, the same one who I’ve got wide-screen digital video of her since before she was born and is now 12).  I just got it back a couple of days ago and it appears to be working fine.  Other than THAT problem (which, of course, was a HUGE one), I’ve not had any reliability problems at all.  Everything else still functions perfectly.

Most people don’t think about the connections on a camcorder when they buy it.  They usually discover, after they’ve opened it and used it for a little while, that it’s missing something important.  This Sony DCR-HC30 has every connection available for analog input, analog output, and digital input and output.  The following chart lists its connections:

This Sony DCR-HC30 Handycam camcorder has too many features to list here, but the important ones are: 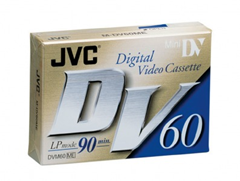 The Sony DCR-HC30 records onto standard Mini DV tapes.  These tapes are for recording digital video.  I’ve got some going back 12 years and look just as good as the day they were recorded.  Other digital media that have come since this camcorder are camcorders with internal, large capacity hard drives, SD memory sticks, mini DVD-R, and standard sized DVD-R.  Mini DV tapes come in 30 or 60 minute tapes and the 60 minute tapes cost roughly $4/tape.  DV video (not to be confused with the generic acronym for “Digital Video”) is a very specific  specification.  It represents 720×480 pixels at 29.97 frames per second (same frame rate as standard broadcast TV).  It does not try to maximize compression by storing only the differences between frames to save space.  Instead, it’s more like a collection of individual JPEG image files.  No one image is dependant on the contents of the prior image in the video.  But, each image is compressed, in its own right.  This amounts to much bigger video files than MPG video, but when there’s an error, it doesn’t continue across multiple frames later in time.  DV video occupies about 13GB per hour of video.  So, when you dump your video to your PC, make sure you’ve got plenty of space to hold it.  If you’re going to edit the video, you’ll need at least twice that space.  With today’s hard drives being in the thousands of gigabytes, that shouldn’t really be a problem anymore. 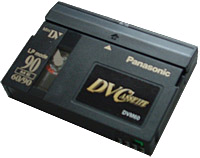 It should be noted that Sony created a mostly useless technology with specialized Mini-DV tapes that also have a chip inside of them so that you can record dinky little titles.  The Sony tapes with these chips are MUCH MORE expensive and not worth it at all.  I highly recommend NOT buying these tapes.  You won’t have any use with them, especially, since you’ve already got digital video, if you want titles, transfer the video to your PC and add some really nice titles using any off the shelf video editing software, or even the software that comes with your computer (iMovie for Macs and Windows Movie Maker for XP and Vista, or Windows Live Movie Maker download for Windows 7).  All of these programs are free and come with your computer (unless you’ve got Windows 7, in which case you’ll have to download it) and provide all the features your typical home video editor will need.

The Sony DCR-HC30 comes with a battery that holds about a 1/2 hour charge while recording… longer when not recording or playing back.  The tape mechanism is fragile (as is the case with most Mini DV camcorders), so don’t push in on it.  Let it automatically eject and close.  There’s only ONE place to push down on it and it’s clearly labeled.  A 3 hour battery is available and I highly recommend it.  It does, indeed hold 3 hours of use.  External chargers are available as well, if you want to charge one battery while using another.  The camcorder feels comfortable in the hand with the hand strap.  All the features work quite well and the on-screen menu is extensive (and sometimes confusing for specific features you may be looking for).  Over all, I give this camcorder 5 out of 5 stars for capability, but 3 of 5 for reliability because of the CCD problem that caused me to lose 3 years of use with it.