Heads up to MySQL and .NET developers.  MySQL appears to have a bug in the .NET connector code.  If you’re using typed datasets and drag a table from the server explorer onto your data set designer, it will appear to work (and it does), but it also generates SQL code with the name of the database hard coded in front of the table name.  This is not a problem if the name of your development database is the same as your test and production databases.

If your production or test database has a different name than your development database (the database you were connected to when you dragged the table or other DB object from server explorer onto your data set design surface), then when you change your connection string to use your test or production database with a different name, it will fail, even if you explicitly specify the name of your production or test database in your connection string, the hard coded development database name is STILL in the generated SQL and your code will fail to execute.

The solution is to manually remove the hard coded database name prefix from all of the generated SQL in your typed data set.

If you’re writing code that uses Apache Directory Server (a free, open source LDAP server), you may get the error “service unavailable” frequently.  Apparently, there’s an issue with making 2 consecutive calls quickly to the ApacheDS server.  If you put a delay of about 1/2 second between calls, this will usually work around the problem.

ApacheDS does not appear to be capable of handling rapid requests to it.

ApacheDS is a free, open source LDAP server.  If you’ve ever heard of Microsoft Active Directory, it serves the same purpose of that, without requiring you to purchase a full blown Windows Server license to gain that capability.

There’s an issue with it though.  If you’ve ever noticed that after you change a password to an account in ApacheDS, that both the new AND the old password continue to work?  There is some problem with ApacheDS, probably a caching issue, in which the old password is still valid for up to around 2 minutes afterwords.

Knowing that there is a delay will save you hours of research.  Rest assured, the problem is NOT in your own code.

To demonstrate how to disconnect Subversion from controlling a folder on your local drive using TortoiseSVN.  The commands in TortoiseSVN are very vague and in this case, counter-intuitive.

What is “Unversioning” or “Unlinking” or “Disconnecting”?

Neither of these are “official” terms.  As a matter of fact, there does not appear to be an official term for this type of operation.  In short, what we’re talking about here is the act of stopping a local folder from being connected to a Subversion repository in any way.  You’d think this would be simple to find, but it’s not.

How to Unversion or Unlink or Disconnect:

Your folder will no longer be versioned or linked to subversion.  It’s now just another folder on your hard drive.

To demonstrate how and why to merge a branched project under Subversion Source Control back with it’s root project.  The documentation provided with TortoiseSVN, while extensive, is confusing and vague.  Many of the actions described both in the documentation and in the TortoiseSVN GUI are not clear whether they are acting on the local drive or on the server.  The terminology is inconsistent.  This post makes it clear.

For the purposes of this discussion, “Merging” is the act of getting a branched copy of a project on the Subversion server to merge back into the original folder on the server from which it was originally branched.

That’s it.  Your local working copy and your server’s trunk folder now have the latest changes from your branch.

To demonstrate how and why to branch a project under Subversion Source Control.  The documentation provided with TortoiseSVN, while extensive, is confusing and vague.  Many of the actions described both in the documentation and in the TortoiseSVN GUI are not clear whether they are acting on the local drive or on the server.  The terminology is inconsistent.  This post makes it clear.

Branching is when you have a project in a version control system and you want to split off (or clone) a copy of it and work with that copy, making changes (commits) to it over time.  At some later point, you may (or may not) decide to merge those changes back into the main (trunk or head) project.

Part of the “Best Practices” of Subversion usage is to always create a branch when you start working on a new feature or version of a product.  When you’re done, you then merge your branched copy back into the main copy, then delete your branch.

Thought I’d post this online just in case someone can use it:

Here’s the text from the coupon (do not hold ME accountable for any of this.  I’m just copying the Dish Network text.  If you have a problem with this deal, contact Dish Network) 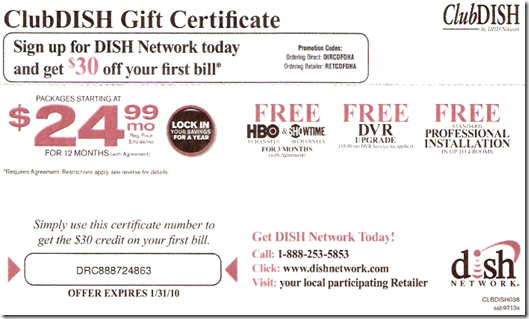 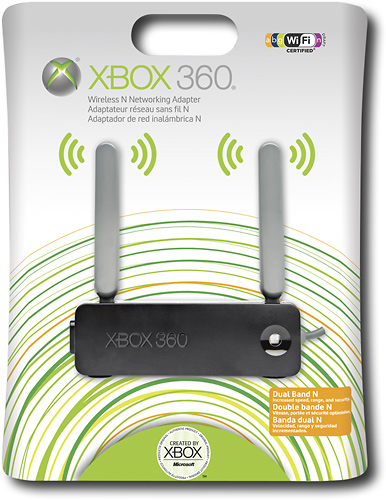 provides wireless connectivity between your XBox 360 console and your home wireless network.  It’s wireless N compatible and is also backward compatible with 802.11a, b, & g.  If you don’t have a wireless-N adapter, you won’t get the high speed benefits of this device.

I haven’t tested the actual throughput of this device yet, but I did run a speed test using the XBox’ 360’s Media Center speed test.  In prior tests with an 802.11g wireless adapter (also from Microsoft), the speed test shows speeds about halfway between what’s needed for SD (Standard Definition) TV video and HD (High Definition) TV video.  All my video tests with prior networking came up short when trying to play HD content.  It always started skipping both the audio and the video.  SD video was always good.  With the new 802.11n wireless adapter, the graph for the MediaCenter test spiked up well above the HD line and capped at the very top of the graph.  This was good news.

I then played some actual HD video by streaming it from my PC upstairs to my XBox 360 through the wireless N network.  The results were mixed.  Video that I had recoded after editing in Windows Movie Maker for Vista played well, with an occasional frame rate drop when the action was rapid.  But, when playing video files that were dumped directly from my HD camcorder to the hard drive, the video would either hang or the frame rate would drop to very low rates.  For example, for Knoxville’s Boomsday fireworks show, it looked like it was down to about 5 to 10 frames per second (when normal video is about 30 fps).  It’s still a major improvement, but still not capable of playing the full HD content from my camcorder.

Ease of set up:

If it hadn’t have come with set up instructions and a set up DVD, it would have been much simpler to set up.  The instructions said to insert the disc, power off the XBox 360, then power it back on, then follow the installation instructions, then hook up the wireless controller.  When I inserted the disc into my XBox 360, it simply said there was a mixed media disc in it.  After shutting down and starting back up, same thing.  There was no software installation and nothing happened.  So, I simply just plugged in the new wireless N adapter and it just worked.  Granted, I had already set up my XBox 360 console with the older XBox 360 wireless adapter, so my console already knew the name and password to my wireless network.  The only set up I needed was to detach the old adapter and attach the new one.

This product retails for $99, but Best Buy had it on sale for $89.  You’re not likely to find it anywhere else for a better price.  XBox 360 hardware generally is always sold at full retail.  If you can find it on sale, that’s the time to get it.  It’s a rare event.

I can’t imagine this would provide much (if any) benefit for gaming though.  I use my XBox 360 console for showing home videos by archiving all of my home videos on my primary PC and streaming them to my big TV downstairs using the 360’s Media Center Extender capability.  Most people aren’t aware of this feature and it’s a highly underused and great feature.  If you’ve got a Windows Vista or Windows 7 PC (or an older Windows XP Media Center PC), you can use that PC to host and archive all of your digital media (videos, music, photos).  Your XBox 360 (as well as the original XBox) is a Windows Media Center Extender, which means, it can connect to a Windows Media Center PC and stream the content strait from your PC to your TV.  This makes it MUCH easier to show your home videos.  You don’t have to mess with finding and hooking up your cables, finding the right tape, pulling out your camcorder, etc…  It’s essentially Video On Demand for your own stuff.

If you don’t have HD content to show, then this XBox 360 wireless N adapter probably won’t provide you any benefits over the older adapter.  But, if you’re buying a new adapter, this is definitely the one to get because it’s the same price as the older one, so you might as well get this one.  I’m not even sure the older one is sold by Microsoft anymore.

I recommend this product if you meet any of the following: