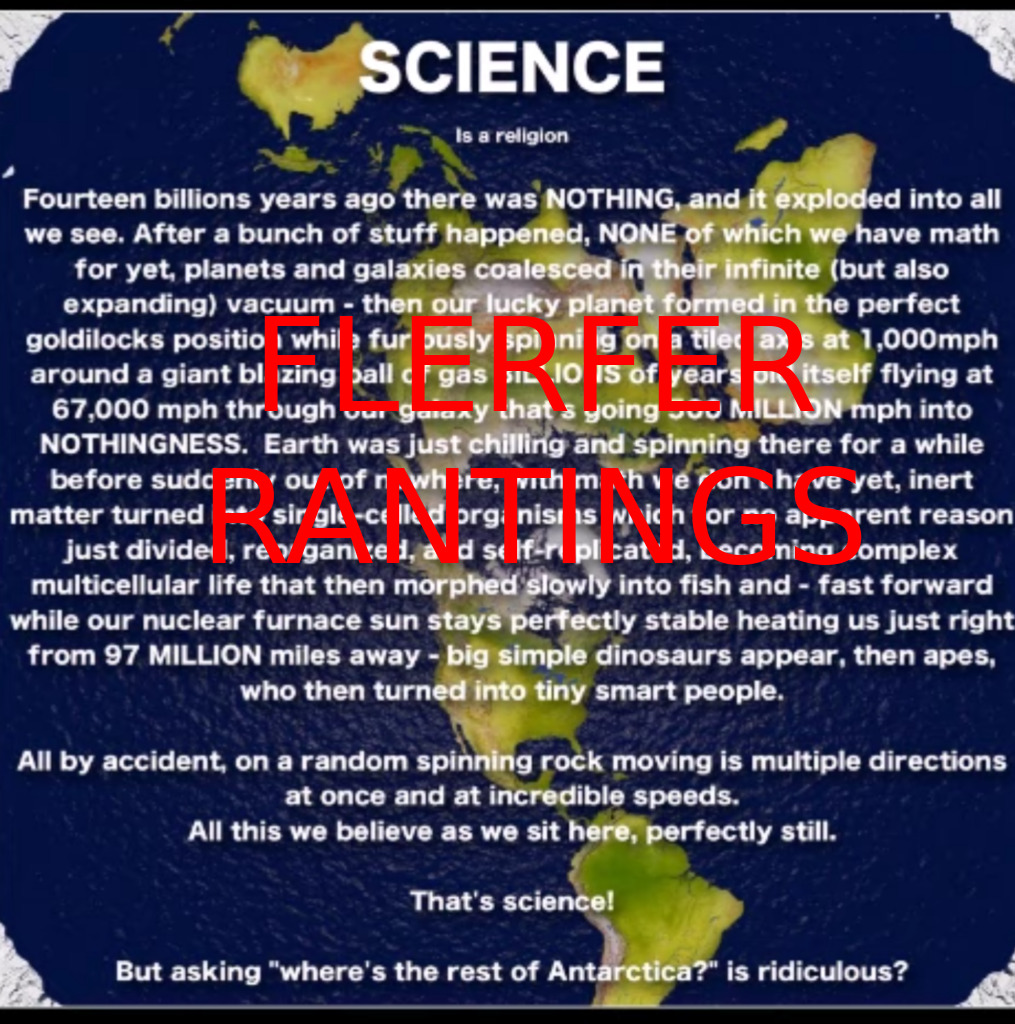 OK, let’s debunk yet another #flerfer meme.  This one is an anti-science rant, and it’s wrong on OH! Soooo many levels.

Let’s discuss each part of the text, one by one:

“After a bunch of stuff happened, NONE of which we have math for yet”.

Do these guys EVER do a simple search?  OF COURSE we have math for it.  We have math coming out of our ears.  In fact, they’ve used that math to create remarkably accurate computer simulations of the evolution of the universe.

Here’s an article that goes with that: https://www.seeker.com/mind-blowing-computer-simulation-recreates-our-universe-1768543905.html

“then our lucky planet formed in the perfect goldilocks position”

They seem to think the Goldilocks zone of our sun is tiny.  It’s not.  Both Venus and Mars in inside the Goldilocks zone of this solar system.  And common sense says that if we’re going to exist on a planet, it’s going to be one that exists in such a zone, of course.  That’s not “luck”.  It’s common sense.   We’re not going to exist on a fire world like Venus or Mercury, nor an ice world like Pluto, nor a gas giant like Jupiter. There are trillions of planets in this galaxy and a sizable chunk of them are in their star’s Goldilocks zones.

Not “through” the galaxy, but with the galaxy.  The Galaxy is a rotating disc and we’re rotating along with it.  And it’s rotating at 492,125 mph at our position in the disc.  But all the other solar systems in our general galactic vicinity are moving along with us relative to the center of the galaxy.  Relative to each other, we’re barely moving at all.  Speed is relative, of course.

Wrong on both counts.  At galactic scales, direction or speed no longer make much sense to talk about unless you are referring to another object to compare to.  For example, how fast are we moving towards or away from the Andromeda galaxy?  How about the pinwheel galaxy?  We can talk about that.  But as far as moving through the universe?  Not really.  But, we COULD use the CMB (Cosmic Microwave Background) radiation as a reference frame.  If we consider that as “stationary”, we can look at the Doppler frequency differences in the CMB in different directions of the sky.  Doing that, we find that we’re moving roughly 2.2 million mph, relative to the CMB, NOT “500 MILLION mph”.

[referring to the abiogenesis of life] “suddenly, out of nowhere”

It wasn’t out of nowhere.  It’s simply chemistry of the right atoms in the right configurations.

“with math we don’t have yet”

Well first of all, yes, we do.  Second, it’s more chemistry than “math”.

“reorganized, and self replicated, becoming complex multicellular life that then morphed slowly into fish”

Yeah.  The flerfer actually got something right, in spite of their uneducated mocking tone of those smarter than them.  Obviously this happened with errors in the genetic copies over time.  Most of them ended up dying.  A small handful were neutral.  And a smaller handful provided some kind of an advantage to survival.  Rinse and repeat, and you eventually get more and more complex organisms.

Nope.  It’s not been perfectly stable.  It has CMEs (Coronal Mass Ejections)… “solar flares”.  Some are huge and dangerous.  It also fluctuates in brightness over tens of thousands of years and over longer periods of time is getting hotter and bigger.  Life can only survive about another billion years on this planet.

Nope.  This planet has gone through hot, dry epochs as well as ice ages.

Pretty much.  Given the vastness of the universe, the trillions upon trillions of planets in the universe, odds are excruciatingly high that many planets are going to be in good conditions for life.

No.  We’re not going in multiple directions at once.  Speed and direction are relative.  Given any reference frame, we’re moving in only ONE direction.  Basic logic and physics here.

Again, speed is relative.  We’re moving at “normal” speeds as would be expected.  And we’re not passing through any kind of a cosmic atmosphere, so the “speed” has no meaningful effect.  Again, speed is RELATIVE.  This is important.  Go get Einstein’s book, “Relativity, the Special and the General Theory”.  Pay special attention to the special theory of relativity.  It explains this simple concept in easy to understand, laymen terms… so simple that even a flat earther could understand.  And I’m not being snarky with that suggestion either.  It’s really important that you read it.  It’s public domain now, so it’s free.  Here it is:

This is required reading before you’re allowed to talk about speed and distances anymore.

“All this we believe as we sit here, perfectly still.”

We’re not perfectly still.  Well, we are, in a Special Relativity perspective.  The flerfer actually listed multiple ways we’re moving as measured by rotation of the planet, orbit around the sun, the sun with the milky-way’s rotation and with the Milky-way relative to other galaxies and relative to the CMB, all of which can be and has been measured.  So, why they say we’re “perfectly still” is puzzling.

Not quite.  With my added corrections, it’s the result of science.  Science though, is actually the study of a body of knowledge.  It’s a way of objectively finding truth.

“But asking ‘where’s the rest of Antarctica?’ is ridiculous?”

Well, that’s the first time I’ve heard of that question.  Do they mean “the rest” other than this?