Everybody seems to have an opinion on this and not just an opinion, but a passionate opinion.  But, how many of us have actually read the text of the bill itself?  Have YOU?  What are you waiting for then?

What parts of it are good and what parts are bad.  Comment below with the references to the text of the bill you’re talking about.

Be sure to also vote on the poll of what you think about SOPA here.

The bill is tabled for the moment, but the internet has been on fire with rage around the SOPA (Stop Online Piracy Act).  What do YOU think of it?

WHY do you think that?  Leave feedback below.

Also, vote in the poll:  Have you read the text of SOPA?

Are there other blogging platforms you use or that you’d recommend?  Leave a comment below.

If you try to install the 64 bit version of SQLite on your Windows 7 64 bit system, you’ll find that your code will break.  It simply won’t work.  You’ll also find that when you try to add a connection in “Server Explorer” inside of Visual Studio, that there’s no option for making a SQLite connection.

This is because, for some reason, none of the current versions have the install for a SQLite connector.  For that, you’ll have to install the really old version 1.0.66.0 executable first.  After that, you can install the latest 32bit version (the 64bit version doesn’t work).  Once 1.0.66.0 is installed, you’ll have SQLite available in Visual Studio:

How does this work?

It’s pretty simple, really.  The lighter colors in the image will temporarily “burn” your retina, so those parts of your retina that have had those parts of the brighter image shone on them become less capable of seeing light, or more specifically, that color of light.  As a result, when you look at an evenly white image (a blank, white page), the parts of your retina that did not view bright parts will sense more of the light reflecting off the blank, white page you’re looking at.  So, you’ll see a negative, of what you were staring it.  The same is true for the colors too.  When you stare at blue, for example, then look at a white page, your blue receptors aren’t working as well as your red and green receptors.  So, you see more red and green light than you do blue.  Red and green light mixed together appears as yellow… the visual opposite of blue.

So, How did I make that image?

Easy.  I just snagged her photo she published on her G+ profile page, loaded it into Paint.Net, and hit the Invert command.  Here’s a quick flash video demonstrating how to make one of your own.

Many thanks to Jeri Ryan for permission to use her image and for her sharing this article with all of her followers on G+ and Twitter!  It’s very much appreciated!

Enough with all the tips on how to survive the coming zombie apocalypse as a living person with all their petty concerns like food, shelter, and reproduction.  The easiest way to survive is to become a zombie!  Odds are, based on all prior zombie apocalypses, zombies outnumber the living by about a 100 to 1 margin, you should plan on how to survive the wrath of the dwindling living once the inevitable happens to you… when you’ve run out of ammo, your chain saw has jammed, and your girlfriend freaked out and took off without you in that 1970’s model pickup truck you acquired at that old farmhouse last night, and you’re cornered, in the basement, by 11 zombies, with 30 more shuffling in through the cellar door all chanting “brains! brains! brains!”.  Face it:  You’re toast!

So, why not make the most of it?  Good news!  You’re virtually immortal and probably impervious to pain!  There are only a few things that can kill you dead now:

Short of that, you’ve got nothing to worry about.  No longer are you concerned with things like food, shelter, repopulating the human race, running and hiding, brushing your teeth, grooming, personal hygiene, or even your own health.  Congratulations!  You’re now part of the majority!

But, there are a few survival tips you’ll need, even for the dead, in order to wonder aimlessly until your rotting corpse turns to dust.

So, there you have it.  Think out of the box and avoid those chainsaws!  Good look!

Or, as a last resort… I’ve recently downgraded this system from 4 stars down to 2 stars.  Check back soon for WHY.

The most prominent feature of this PC is that it has a Multi-Touch monitor!  Yes!  You can control the PC by touching the screen!  The next most prominent feature is how inexpensive this was.  The ENTIRE set up was cheaper than most touch screen monitors.  I mean, the whole PC, monitor, keyboard, mouse, software, EVERYTHING was cheaper than a single touch screen with no PC or anything else.  This PC retails for $649 at the time of this writing.

I bought this for my daughter for Christmas 2011.  She was at the house when UPS dropped it off, so it was no longer a surprise, so we went ahead and opened it and gave it to her (no sense in wasting 30 days of a 90 day return warranty!)

Note, the actual warranty is a 1 year, limited warranty.

Note that we’ve had about a month and a half experience with this at the time of this writing.  So, let’s get started:

It came in one box about 4 feet wide, 2 feet tall, and 8 inches thick.  There was a box with the mouse and keyboard in it and there was the computer between two large Styrofoam protectors and wrapped in a cushy bag.  The keyboard and mouse are wireless and came with a tiny USB receiver.

Note that this is an all-in-one PC.  That means the monitor and the PC are one piece of hardware.  Just as the picture indicates, you’ll have 3 items on your desk.  The PC, keyboard, and mouse.  That’s it, which was nice not having tons of cables and junk to mess with.

This was, by FAR, the easiest set up of a desktop PC I’ve ever had!  There’s only ONE cable!  ONE!  And that’s the power cable.  I plugged in the wireless receiver to a USB port on the right side of the monitor.  I pulled the tab from the battery compartment on the mouse and turned on the mouse.  I added the provided batteries to they keyboard (2 AAA) and I plugged in the power cable.

When I turned it on, it recognized the wireless keyboard and mouse and booted into the Windows 7 Home Premium desktop.  I created my admin account and my daughter’s user account.  It found my wireless network and I entered the credentials and was online in seconds. 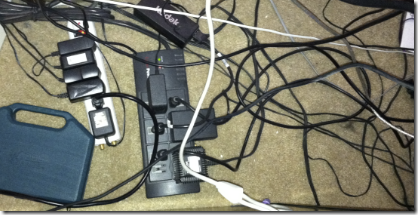 And this is AFTER a MAJOR clean up!  This is as good as it gets with my PC!

PC Magazine defines it as:

“Refers to the many “extra” programs pre-installed on some PCs that offer little value (they are “shoveled” in without regard to quality). Also called “crapware,” shovelware is geared to first-time buyers, who think they are getting more for their money. The term first appeared in the mid-1990s when tons of shareware programs were copied onto CD-ROMs and advertised in magazines or sold at computer flea markets.”

UrbanDictionary.com defines it as:

“an array of haphazard software emphasizing quantity rather than quality

This shit is totally half-assed. Who assembled this shovelware?”

This computer is no exception.  I won’t list the junk that’s on there, but there’s plenty of it.  I uninstalled all that had no redeeming value.

It is nicely configured for touch capability with oversized title bars and buttons on the title bars of all windows (easily user configurable since the early 1990’s, BTW).  It has an icon in the upper-right on the desktop.  When you touch it, it slides out a touch interface for several touch programs and settings.  It’s pretty nice.  BTW, if you haven’t tried Google Earth with a multi-touch monitor, you’re missing out on life!

There’s a touch, video keyboard to and you can even use it to log into Windows.  It works well.

Windows Paint, which is not an awesome paint program by any measure, works very well with touch, and even with multi-touch.  Let’s go ahead and define multi-touch.  That’s the type of touch interface that can respond to multiple touches at the same time, as opposed to touch screens, like the older Windows Mobile phones (and most others in the pre iPhone era) that could only recognize ONE touch point on the screen at a time.

I won’t repeat all the specs here.  If you want a full spec sheet, click here for it on Acer’s web site.

In short, it has:

I didn’t run any benchmark tests on it, but it is plenty fast from my own, personal testing and I’m an overclocking geek with a QuadCore CPU on my own desktop (NOT THIS COMPUTER that I’m reviewing!)  Games and graphics software and the whole user experience is very zippy.  I noticed no lags on anything important.

My daughter is highly pleased with it and spends an awful lot of time on it both browsing the web and using the paint software.  I also installed several other graphics programs for her as she is a bit of an artist.  I was pleasantly surprised at the ease of set up and the fact that there’s only ONE cable!  That just astonishes me!  The performance is great.  The multi-touch screen is awesome.  It comes with plenty of RAM and hard drive space, and the low price is fairly shocking considering what all you get.  I’ve always been pleased with Acer hardware.  They tend to have the best bang for the buck and they didn’t disappoint with this computer.

My daughter, who uses it much more than me says she’s “really likes it” and the only problem is the touch on smaller items is difficult to touch the right thing.

The only thing holding it back is the shovelware and the wrinkly film on the touch screen.