Now, with this, it’s much more than a GMail account.  It’s your own domain with e-mail.  You can created multiple e-mail addresses (each with their own 7.6GB inbox limit).  Create one for yourself, one for your spouse, one for each of your kids, etc…  I won’t go into all the details of what you can do it, but suffice it to say, it’s SIGNIFICANTLY more powerful than a simple GMail account.

Now that you’re all set up with your new whiz-bang e-mail server, here are some tips to use the power of it to completely stop SPAM!

BTW, if you want an invite to Google Plus, e-mail me at

. That’s not a clickable e-mail address… It’s a picture to prevent spammers from easily scraping it. You’ll need to type that address, exactly as you see it, including the G and the + in front of the word “Invite”.

You’ll find an actual working version of it at the bottom of this article. Please click the appropriate buttons in it to let your friends know about this article so they too can quickly quickly get up and going with their own domain names and free hosting by Google!

I was recently migrating some web apps off an old server onto a newer one.  Both servers were running the same OS (Windows Server 2003) and both had IIS 6.0.  I had a .NET 4.0 web site that when migrated, produced the following error:

Description: An error occurred during the processing of a configuration file required to service this request. Please review the specific error details below and modify your configuration file appropriately.
Parser Error Message: Unrecognized attribute ‘targetFramework’. Note that attribute names are case-sensitive.
Source Error:

I Googled and I even Binged and all the “answers” I found said to change the app pool that the app uses to use .NET Framework 4.0.  Well, in IIS 6.0, setting the .NET framework on an app pool is not even an option. 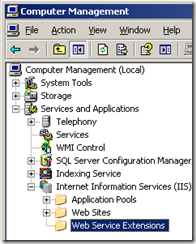 Ever tried searching for a file with an extension that’s not one of the few “standard” ones?  Good look finding it with Windows 7, especially when looking for content in files.  There’s just a LOT about Windows 7 search that just doesn’t work and is completely unintuitive, despite all the hype given to it, it’s not all that good.  In fact, it’s severely lacking compared to Windows XP search, which itself, is pretty lacking.

I’ve been looking for about a year for a free replacement and finally found one that provides ALL the features you used to have in XP search, and then some!  It’s a free, Windows 7 (32bit and 64bit versions available) application that provides all the intuitive search features you expect AND it doesn’t miss files in the results.  It can also replace your default W7 search.

It’s called “Agent Ransack”.  Download it from the link.

Just like you’re used it, it provides a right-click menu on folders from within Windows Explorer. 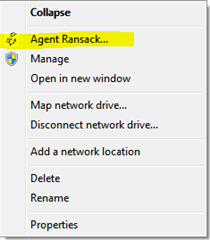 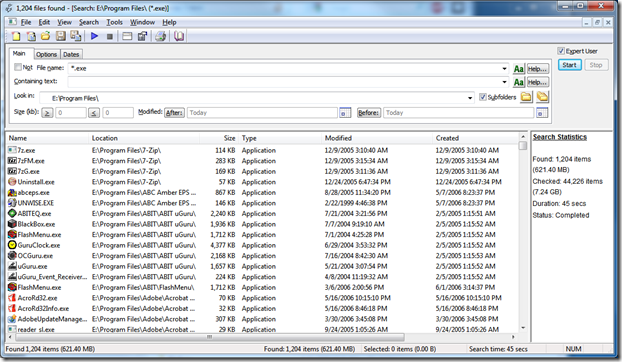 Use this in combination with “Classic Shell”, a program that restores lots of the functionality that Microsoft removed from W7 and you’ll have a super-functional system that you can get back to being the power user you once were in XP.

I first saw the original TRON movie when I was twelve, back in 1982.  It’s use of computer graphics (first movie to do so) and unique story drew me in.  That was the same year I took my first computer course and have been neck deep in computer programming and the latest tech ever since.  No, the movie is not what got me interested in computers, but it was still an awesome movie to a twelve year old at the time.  I’ve only seen it two or so more times since it came out… while channel surfing and nothing else was on.

When I saw the first trailer for “TRON Legacy” earlier last year, I couldn’t believe it.  No, I wasn’t overwhelmed with excitement like “TRON Guy” probably was… I just couldn’t believe they’d wait 28 years for a sequel.  What I mean is, after 28 years, I wouldn’t have expected a sequel.  To tell you the truth, I didn’t expect a sequel after the first movie.

Back story:  Kevin Flynn (Jeff Bridges), in 1982 owned a video game arcade called “Flynn’s”.  He hacked into a mainframe at a give computer software company by breaking into their lab at night.  What he didn’t know was that they were also working on a prototype teleportation device.  The “master program” in the mainframe was an AI program hell bent on taking over the world.  It also could recognize Kevin’s hack attempts and knew when it was Flynn attempting to hack.  The master program disliked Flynn.  The night he was in the lab, hacking the main frame, he just happened to be sitting directly in line with the transporter prototype, so the master program activated it and “digitized” Flynn, bringing him into the virtual world of the mainframe and put him as a character into video games to be killed.  (1982 spoiler alert!)  Using his human intelligence, he out-smarted the games and the master program and was able to re-integrate himself out of the virtual world, back into the real world.

As “Tron Legacy” begins, we learn that he then created a video game called “TRON” and made millions and eventually bought the company that owned the “master program” mainframe that he was sucked into and destroyed it, replacing it with a more powerful program.  His intent was to transform humanity with what he learned and experienced in 1982 (though, I’d imagine the result being something similar to the Borg).  In his new virtual world, he created a virtual copy of himself that he called “Clue” that would be his helper to create a “perfect” virtual world.  Similar to the story line in iRobot, the “Clue” program defined for itself what “perfect” meant and turned against its creator, trapping Flynn inside the virtual world in 1989.  To people in the real world, he just disappeared one night.  He also had a son Sam (Garrett Hedlund) that he left behind.  In the 20 years since, Flynn’s company made a comeback and has been run by a board of directors.  His son, Sam, has controlling interest in the company, but lives the life of a James Dean style rebel instead and has no personal interest in the company.  One night, Flynn’s friend, who’s also on the board of the company, receives a page from Flynn’s old office # from the arcade (a phone # that was deactivated 20 years ago).  He notifies Sam, who goes to his father’s closed arcade that’s just been collecting dust since 1989.  He discovers a secret room in the arcade that was obviously his father’s secret office.  He turns on and hacks into the old computer system that’s there.  Unbeknownst to him, there’s a duplicate transporter device in the office that activates and digitizes Sam into the virtual world, where he meets what he first thinks is his father (Jeff Bridges), who hasn’t aged and doesn’t seem to care about his son, Sam.  He quickly finds out that it is his Father’s cloned program “Clue”.  He is thrown into computer games, just as his father was, with the intent of being killed.  He too escapes the games, with the assistance of a virtual character who leads him to his real father where they team up to try to defeat Clue and escape back into the real world.

I’m not going to give a spoiler and there are some plot twists that I won’t reveal either.  Hey, you’re going to want some surprises when you see the movie!  I haven’t told you much more that you can’t learn from all the public trailers.

I don’t generally make a mention of music, but this film has some cool a$$ music by a group named “Daft Punk”.  I’d never heard of them, but then again, I don’t keep up with pop music like most people do or like I did when I was teenager in the 80’s.  Maybe everyone already knows who these guys are and I’m late to the scene (not that I give a rats…).  In either case, they create electronic sounding music that’s perfect for this type of a movie.  Since 1991, I’ve probably only spent about $30 to $40 on music for myself (total).  My collection of cassettes and CDs from the 80’s (and the 2 or 3 that I’ve bought since then) that I’ve ripped to MP3’s and WMA’s a decade or so ago are pretty much all that I care about.  In the very early 90’s, when MTV started playing crap, alternative, wussy music videos and then stopped playing music videos altogether, I lost interest in the music scene and have never looked back.  I may make an exception this year decade and actually purchase this album (yah, I’ll be purchasing those old, archaic things we used to call “compact discs” (ask your parents) rather than purchasing a lower quality and DRM’d/restricted download).  When I hand over money, I actually expect to own something and to have control over what I’ve purchased.  I’ll rip (legally) the songs to MP3’s from my legally purchased CD myself and archive the disc in my late 1980’s era CD drawer case! 🙂  (after I pull it out of storage).

This is a great movie that middle-aged parents and kids alike will enjoy.  I’m certainly not encouraging anyone to make their own, homemade TRON costume to wear out in public like Tron Guy or anything, but it’s a really good movie, with a good cast, great music, and impressive special effects… plenty of chases, fights, and ‘splosions!  It’s rated PG and is perfectly safe for kids as young as 6 or so.  Yes, they say “Damn” once or twice and there’s nothing sexual in the movie, with the exception of some notably attractive actresses.  The only violence in the movie is the deletion of “programs” (portrayed by human looking characters who are digitized out of existence) and a couple punches and kicks.  As for blood and gore, there are only 2 drops of blood, simply to illustrate that the character bleeding is a human and not a program.

Two thumbs up from me.