This is just an online, public bug report about bugs in Quicken 2009. I’m hoping that publishing them will quicken (pardon the pun) Intuit in fixing them. 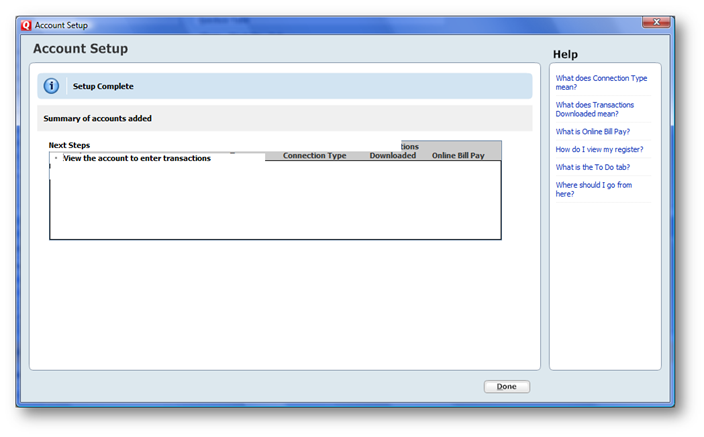 I’ve spent about 4 hours with tech support over the last week trying to undo this. There’s a dialog box buried in the app where you can tell it don’t create new rules. It was already configured to NOT do those rules, yet it does them anyway. This is clearly a bug and Intuit needs to step up to the plate and admit it and fix it. I’ve been reporting this bug since Quicken 2007. I skipped Quicken 2008, so I can neither confirm nor deny that the bug is in Quicken 2008, but I’d assume that it’s there as well.

Usually I’ve got programming posts here, but occasionally I’ll rant or post a solution to a problem that’s just computer related and not programming related. This is one such post.

PROBLEM:
I’ve been experiencing a painfully slow boot process even though I’ve got a pretty powerful system at the time of this writing (2008-01-24). I’ve got an Intel DG33FB motherboard with a processor with 4 cores (an Intel Core2 Quad CPU Q6600 running at 2.4Ghz) and 4GB of RAM, plus other, non-boot time relevant hardware added. The problem is the motherboard would stall for 2 minutes and 45 seconds BEFORE attempting to boot from a drive.

To add insult to injury, not only does the motherboard stall for 2 minutes and 45 seconds BEFORE it even attempts to boot from any drive (this means you can’t blame Windows), then after Windows starts booting, it then stalls for ANOTHER 2:45!!! I had presumed that it too was waiting on some sort of hardware response from the motherboard since the timings were awfully suspicions. So, that means I’m waiting for 5:30 for ABSOLUTELY NOTHING! This doesn’t even count the actual Windows boot up time.

So, I did what anyone else would do. I Google’d for a solution. I found many blogs and posts from other users experiencing the same problem. Few found a solution. Several had contacted Intel and Intel didn’t know what the problem was. So, I went to the Intel site and searched for a solution to the problem anyway. I did find that the latest BIOS update (1/5/2009) addressed a “slow bootup” problem, so I downloaded and installed it. No luck. Other blog posts were saying that they fixed the problem by down-grading their BIOS to an older version. For some reason, Intel found and fixed this problem, then intentionally removed the fix from subsequent BIOS updates. I wasn’t real keen on downgrading my BIOS. Sometimes there are bug fixes for some serious stuff… even more serious than a painfully slow boot up.

I decided I’d try ONE LAST thing before I went the route of downgrading my BIOS. I shut down the PC and unplugged EVERYTHING. And by “everything”, I mean all my internal hard drives (3 of’em), my DVD drives, all my USB devices (including keyboard and mouse), my FireWire devices, and my network cable. The only things left were my video cable and audio cables (all analog output, so virtually no chance that they were causing problems). I turned on the computer and low and behold, it only waited about 19 seconds at the same spot it was stalling at before. So, I’ve determined it was an external peripheral somehow causing a problem. So, I plugged all the USB cables back in, turned it on and got the stall again. Narrowed it down to USB devices. So, I unplugged them all, rebooted for a sanity check and it only stalled 19 seconds. I then plugged each USB cable back in one at a time, booting after each one. I narrowed it down to my USB 2.0 hub (or one of the devices connected to it). So, I then left the hub plugged in but unplugged everything from it and rebooted… quick start. OK, now I plugged each USB device back into the hub, 1 at a time and rebooting after each one until the problem returned.

SOLUTION!
Turns out the thing that slowed it down was a USB cable… JUST a USB cable THAT WASN’T PLUGGED INTO ANYTHING!!! Actually, it was before I started the test, but just the cable itself seemed to cause the problem. It was a cable that I normally have plugged into my external USB Seagate 500GB FreeAgent Pro drive. I thought, what the heck, let’s plug it back in and reboot, and the problem was now gone. Strange! So I plugged everything back in, rebooted and the problem is now gone!!! Even the secondary delay during the Windows boot.

So, problem gone, but I’m still a little amiss that the computer’s hardware configuration is now back in the exact same configuration it was when I had the problem. But I’m good to go.

So, if you’re one of the unlucky DG33FB owners experiencing this problem, unplug everything and plug them back in 1 at a time, rebooting between plug ins until you find the culprit.